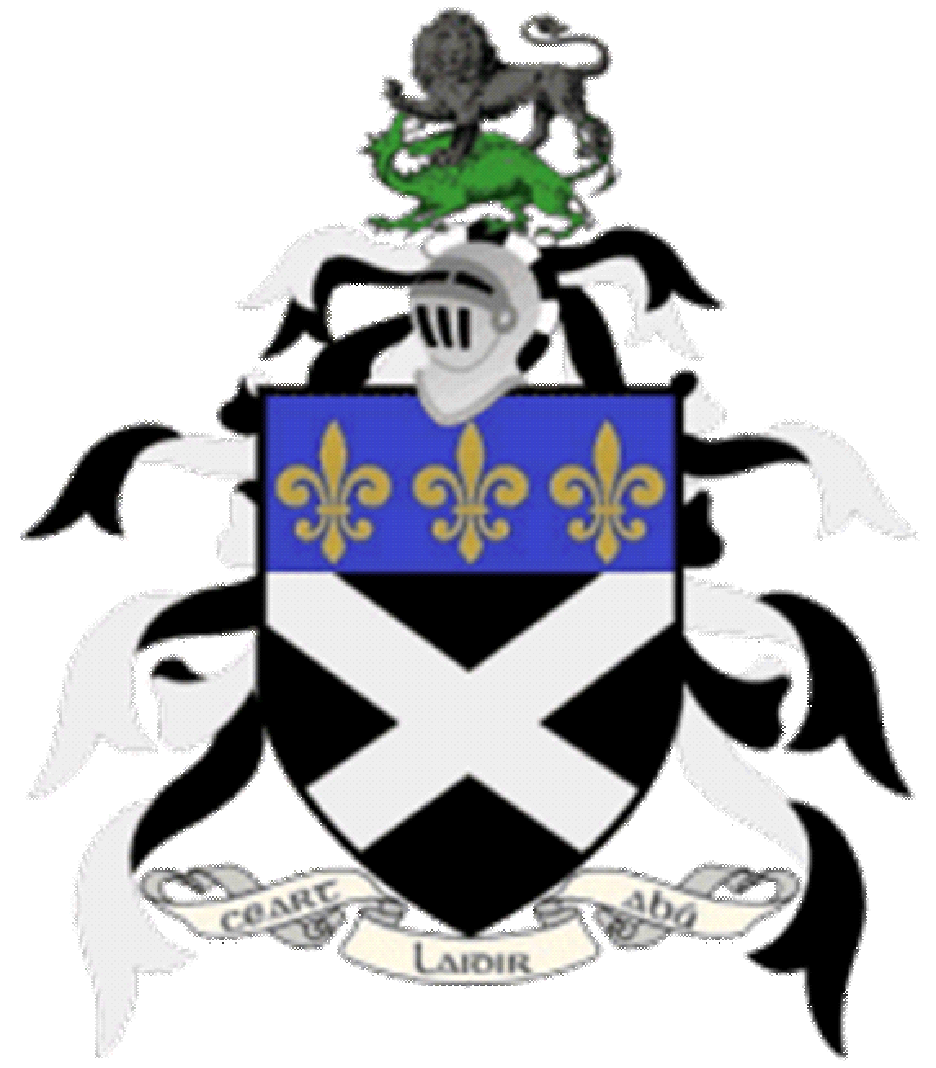 “Arms represent people or groups of people as though they themselves were present. The presence of a coat of arms acts as a substitute for the person even after death.”

The display of Fitzpatrick heraldic arms is full of colorful imagery, raging beasts and sharp lines, all of which are a feast for the eyes. The Fitzpatrick heraldic achievement consists of three main parts: first, the crest on top displays a black lion fighting a green dragon.  The black lion is surmounting the regardant dragon, with his dexter (right) paw resting on the dragon's head.  Second, the arms (or shield) is black with a white saltire (“X” cross) below, together with a chief above (the blue stripe, with three gold fleur-de-lis). Beneath this is the third part; a written motto upon a scroll. The lion and dragon crest and the black and white lower part of the shield generally don’t change but the chief in the upper part of the shield and the motto do change occasionally, depending on which line of the family favours them. Sometimes the upper chief of the shield is white, with three red roundels; other times, the chief is blue, bearing three French gold fleur-de-lis.  When displayed, supporters for the arms have always been a pair of black lions, sometimes crowned and gorged.

This chiefe B: charged with 3: Floru de Lycos O: was given to Barnaby L. of the Upper Ossory brother to Florence now lyvinge by the Frenche K: H: 2:

The Carew Manuscript illustrates the two earliest versions of the Fitzpatrick arms. To the left, with the white chief and three gold estoiles of eight points within a torteau (red roundel), is that which is associated with the Baron Line in Ireland.  Its origin and use has not yet been traced, but it could be as early as 1312 because in that year, ‘Sonnethuth Fitzpatrick [most likley Seaffraidh Fin Mac Gilla Patraic] was summoned to attend King Edward II in Scotland, along with other great Irish chiefs, so that probably he was at the fight at Bannockburn’ (Anonymous; 1854+).  It would be likely that he displayed arms at such a time.  This style of the arms with the Irish motto Ceart Láidir Abú was confirmed as recently as 1913 to Frederick Thomas Edwin FitzPatrick.

To the right, is the version with the blue chief and three gold fleur-de-lis; more associated with the Fitzpatrick lines in England.  Carew clearly tells us that this chief was an augmentation given to Sir Barnaby Fitzpatrick by the French King Henry II.  Sir Barnaby was ambassador to France for King Edward VI from November 24th, 1551, to December 9th, 1552, and this would appear to date the fleur-de-lis version.

Colours are fundamental to heraldic illustration, and from the blazons it can be seen that the principal Fitzpatrick colours are white on black; secondary combinations are red on white; gold on blue; and black on green.  Artistic illustrations of Fitzpatrick heraldic emblazons have varied in style through the centuries, while retaining the same essential components. The emblazons show many versions which illustrate the achievement, differencing, or ineligibility of the specific nobility to whom they belong. 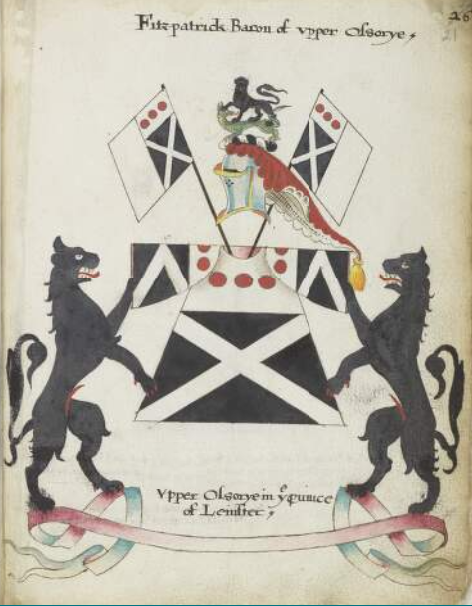 Sable, a saltire argent, on a chief of the last, three torteaux. Crest: On a wreath of the colours, a dragon reguardant vert standing thereon a lion guardant sable, dexter paw on the dragon's head. Motto: Ceart Láidir Abú (Might is right).  Image use courtesy of NLI. 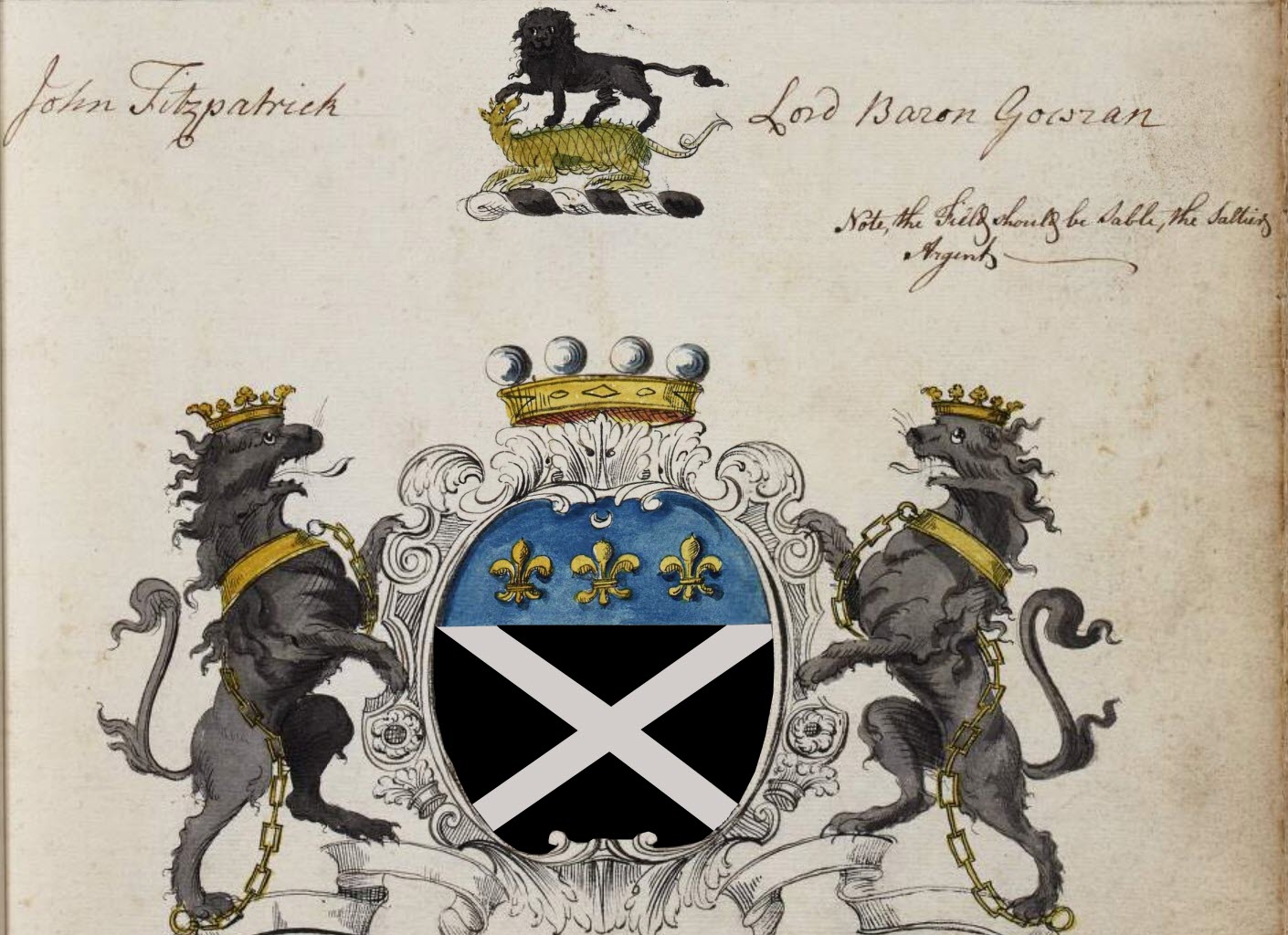 Sable, a saltire argent, on a chief azure three fleur-de-lys or. Crest: On a wreath of the colours, a dragon reguardant vert standing thereon a lion guardant sable, dexter paw on the dragon's head. Motto: Fortis sub forte fatiscet
("The brave may yield to the brave").  Image use courtesy of NLI (with color correction). 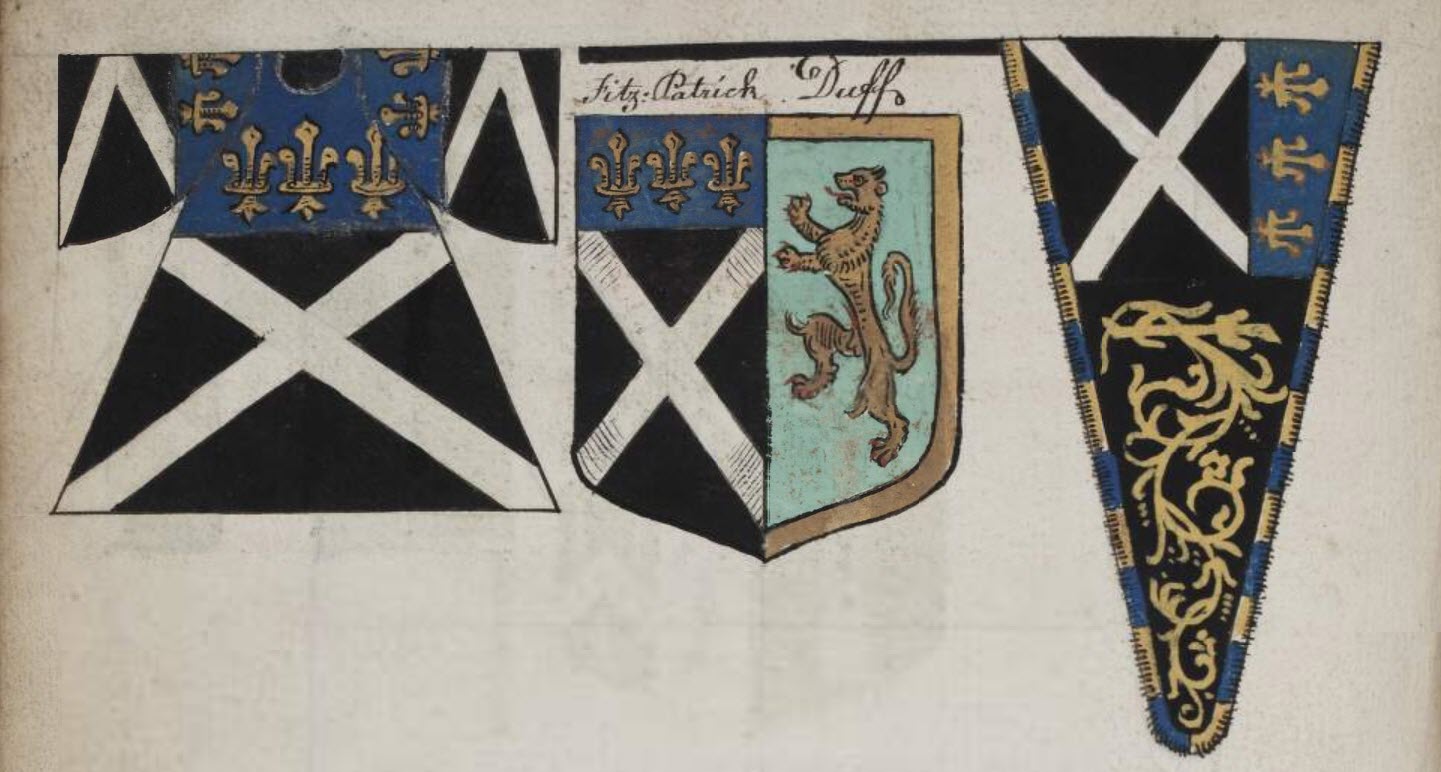 A Fitzpatrick heraldic tabard, the arms impaled alongside the arms of a Duffy bride, and a Fitzpatrick pennon; beautifully illustrated.  The bearer of these arms shows the blue chief and three gold fluer-de-lis, and would have been someone of rank.

Ceart Láidir Abú is the motto associated with the Baron of Upper Ossory c. 1650, and is the motto preferred by the family line in Ireland.  A popular translation of the motto is "Right Makes Might." That could have been a war cry of Fitzpatrick – Mac Giolla Phádraig people and their supporters at one time when they charged their enemies and looked their would-be killers in the eye. But whether that is an accurate translation is lost to time.  Other possible interpretations have been suggested, especially in the context of the civilized and cultured aspects of the Giolla Phádraig.

The three words translate from Irish as: Ceart = Right/Correct; Láidir = Strong; Abú = Forever/Always; so literally, "Right, Strong, Forever"; and all manner of combinations can be suggested. In a different time, in a different place and in a different context, an American President used similar words when he said:

“Let us have faith that right makes might, and in that faith, let us, to the end, dare to do our duty as we understand it.”

This meaning has been discussed over the years at Gatherings and many preferred interpretations have been suggested. In times of peace when there is no need for a battlefield war cry the words of the motto have a different meaning when written:

"We will always be strong if we do what is right."

Fortis sub forte fatiscet is the second Fitzpatrick motto, and translates from Latin as, "The strong shall yield to the strong" or "The brave shall yield to the brave." This motto is associated with Baron Gowran, the Earls of Upper Ossory and the Lords Castletown, and likely alludes to the combat of the lion and dragon crest above the arms.

* The Geoghegan decoration of the emblazon of shield, crest and motto (shown above) was specially prepared and donated to the Fitzpatrick - Mac Giolla Phádraig - Clan Society by heraldic artist Eddie Geoghegan in 2000 AD to whom the Clan Society extend our grateful thanks. 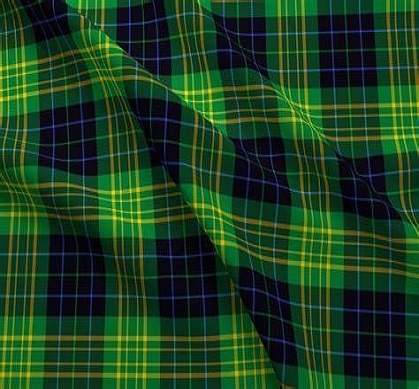 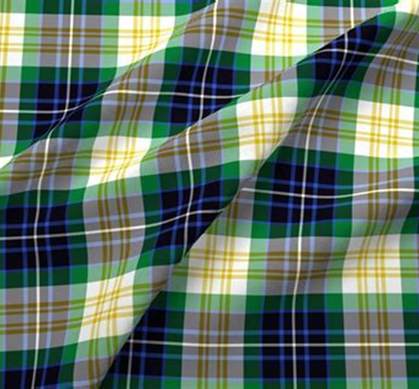 While not medieval Irish garb as was the léine and brat, for well over a century now the Irish have adopted the kilt as a modern adaptation of Gaelic, pleated, bare-legged clothing since the days of the Gaelic Revival and Ireland's struggle for independence.  Important Irish patriots wore the Irish kilt, such as Pádraig Pearse, Thomas Ashe, Con Colbert, and Ireland's first president, Douglas Hyde.  In practical and handsome fashion, the modern kilt has come to fill the void left by the disappearance of the léine and brat, and is here to stay.  Members of the Fitzpatrick clan have been especially prominent advocates of the Irish kilt over the past century.

Today's modern tradition of military bagpipe bands is inseparable with the wearing of kilts; yet one of the earliest mentions of Irish pipers comes from an account of the funeral of Donnchadh mac Ceallach, king of Osraige and ancestor of the Fitzpatricks of Upper Ossory, in AD 927.  Celebrations around the globe on March 17th, the feast day of our namesake St. Patrick, have been universally celebrated with bagpipes and kilts since the 19th century.  Bernard Edward Barnaby FitzPatrick, 2nd Baron Castletown, (d. 1937) and last recognized Chief of the Name, was a founding member of the Pan-Celtic Association, a leading member of the Gaelic League, and a great admirer of kilts, tartans, and bagpipes as valid expressions of Irish identity in the modern world.  Lord Castletown was a fluent Gaeilgeoir; he was good friends with Douglas Hyde and was the first Irish regimental commander to outfit his troops (the 4th Battalion of the Leinster Regiment- formerly the Queen's County Militia) with kilted bagpipers for marching, as early as 1903.  W.H. Grattan Flood's book, The Story of the Bagpipe, is dedicated to the 2nd Lord Castletown.  One of our own Clan Society members, the late Frank Meehan (d. 2012) of Portlaoise, Ireland, was a local authority on the Fitzpatrick tartan, and a great advocate of the kilt as a modern form of Irish dress.  He founded the Irish Kilt Club, and received a letter of affirmation from Irish President Mary McAleese.  Frank attended multiple Clan Society International Gatherings wearing his beloved Fitzpatrick tartan kilt as early as 2000.

Fitzpatricks around the world have begun the modern tradition of wearing these two tartans to mark significant life events, such as weddings, family occasions and Clan Gatherings.  Anyone may wear these handsome fabrics, but especially so if you have an ancestral or marriage Fitzpatrick connection.  More photos of Fitzpatricks wearing tartan can be seen on the Gatherings page. 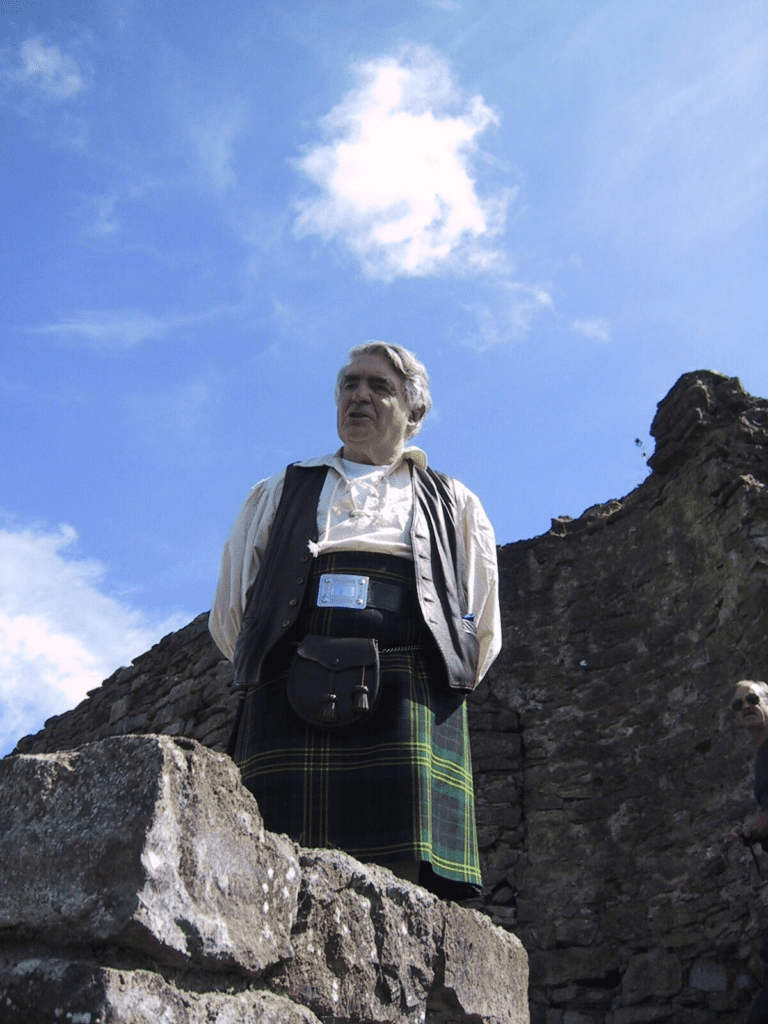 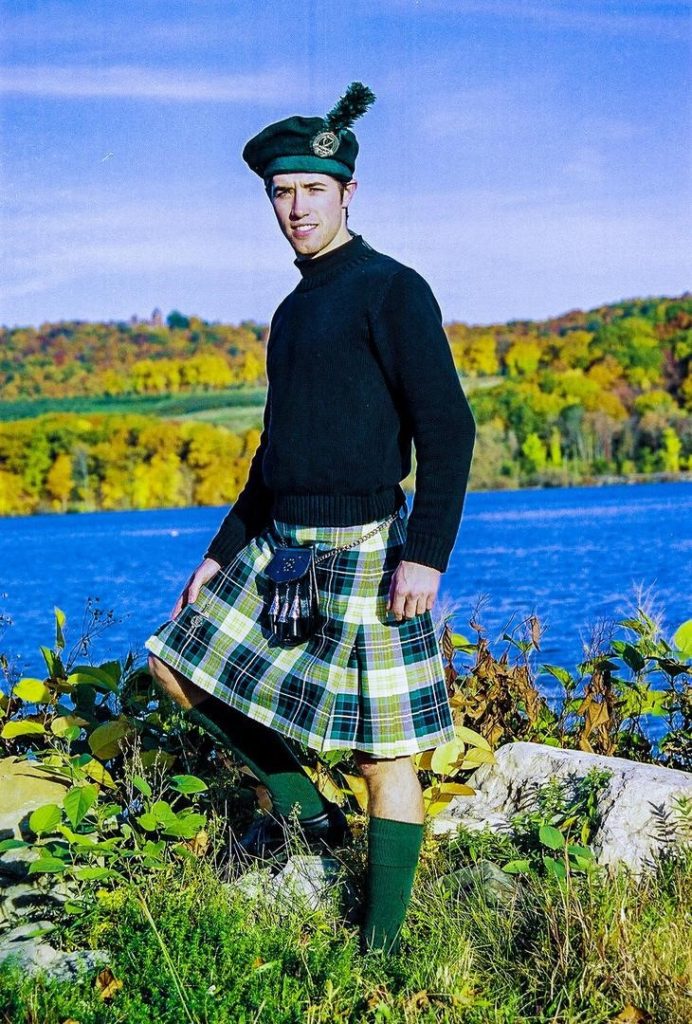 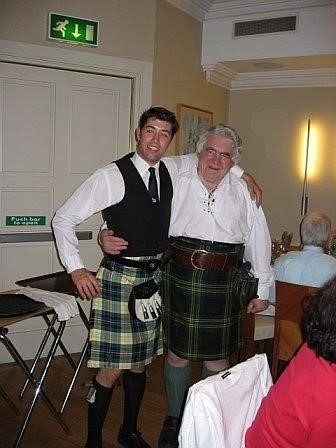 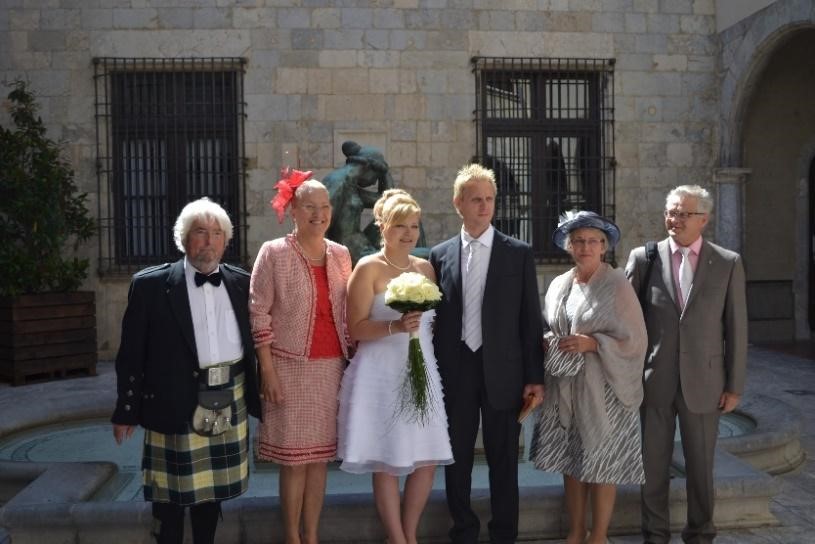 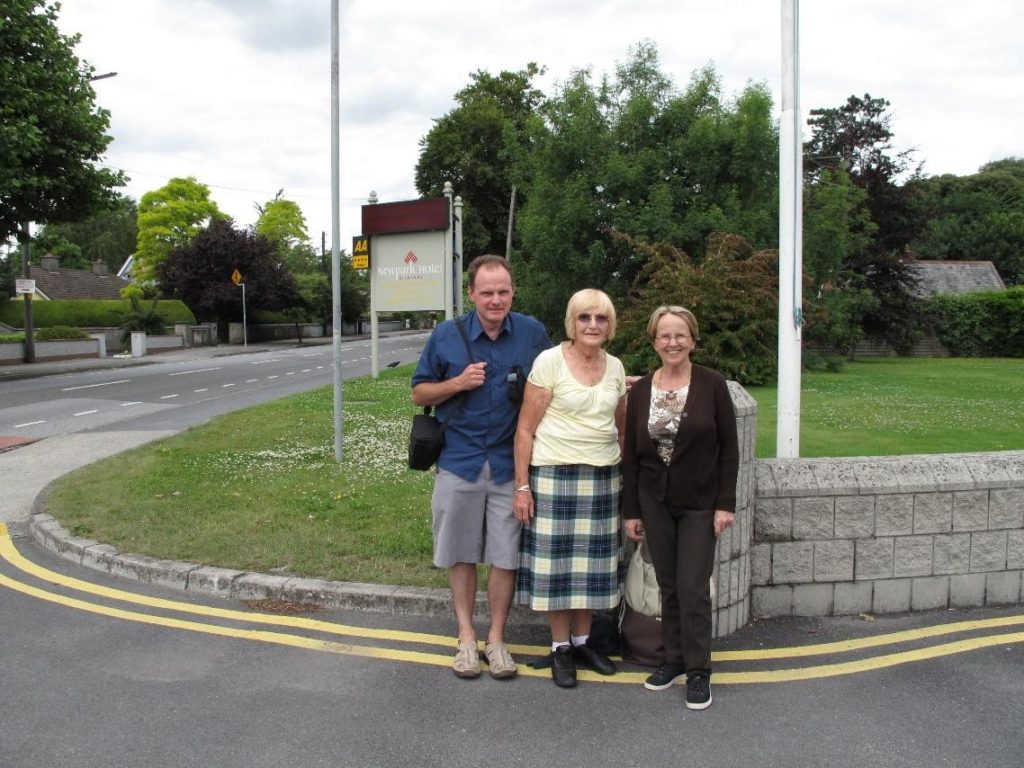 Josephine Cleary of New Zealand in a Fitzpatrick tartan skirt at Jerpoint. 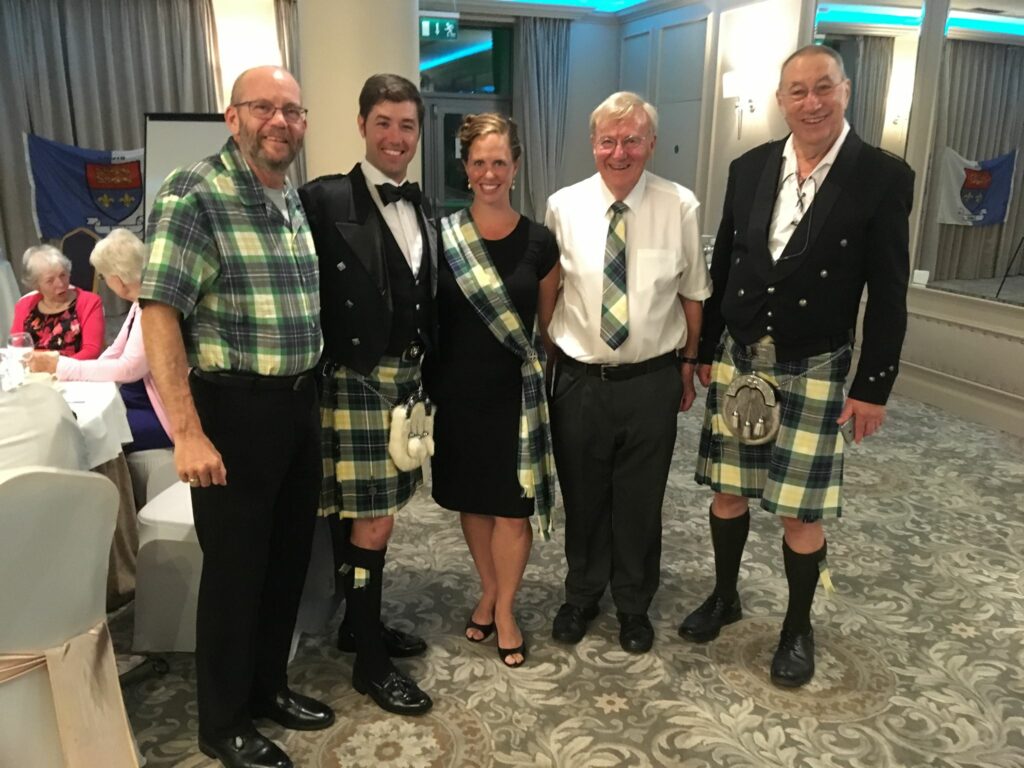 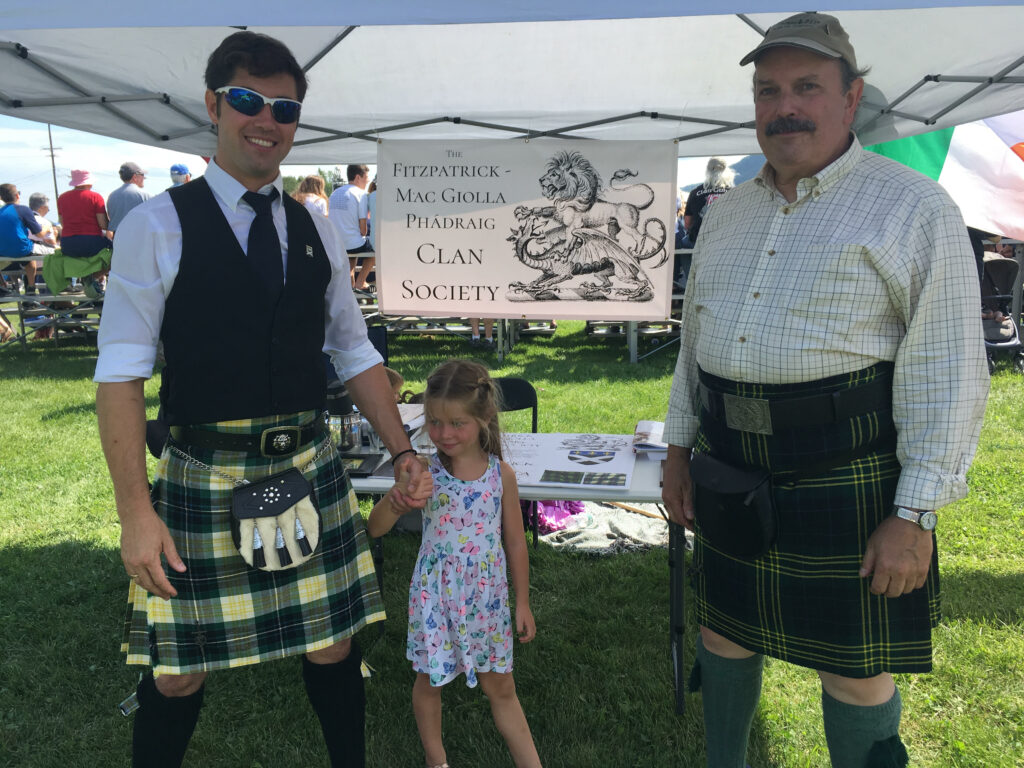 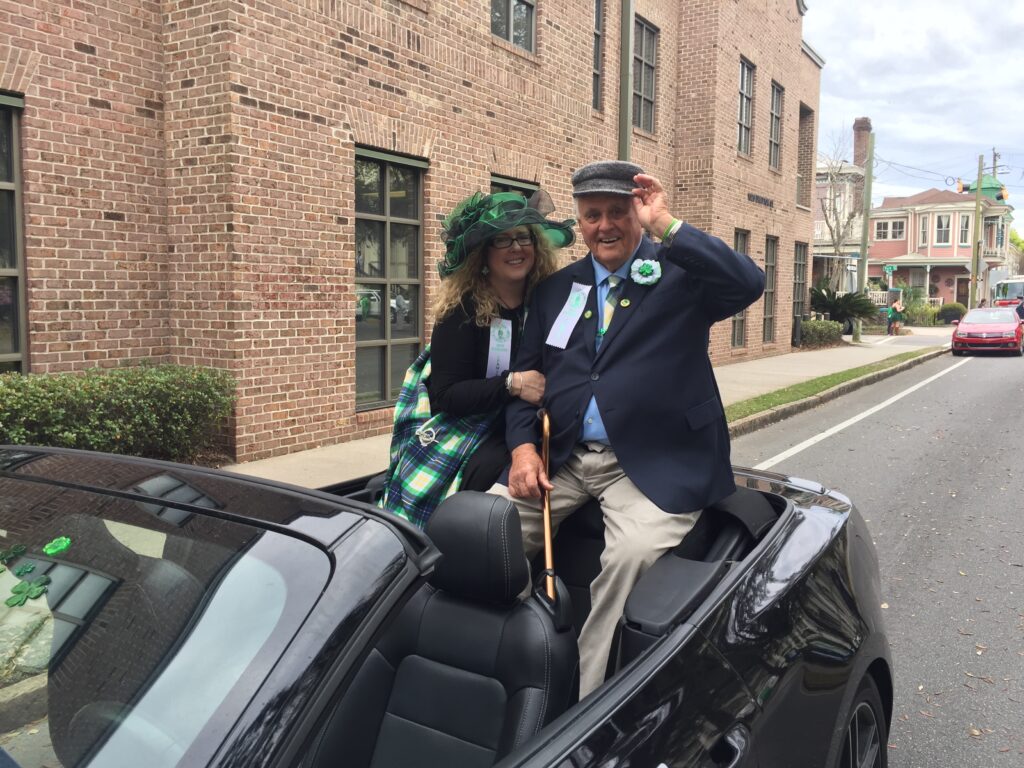 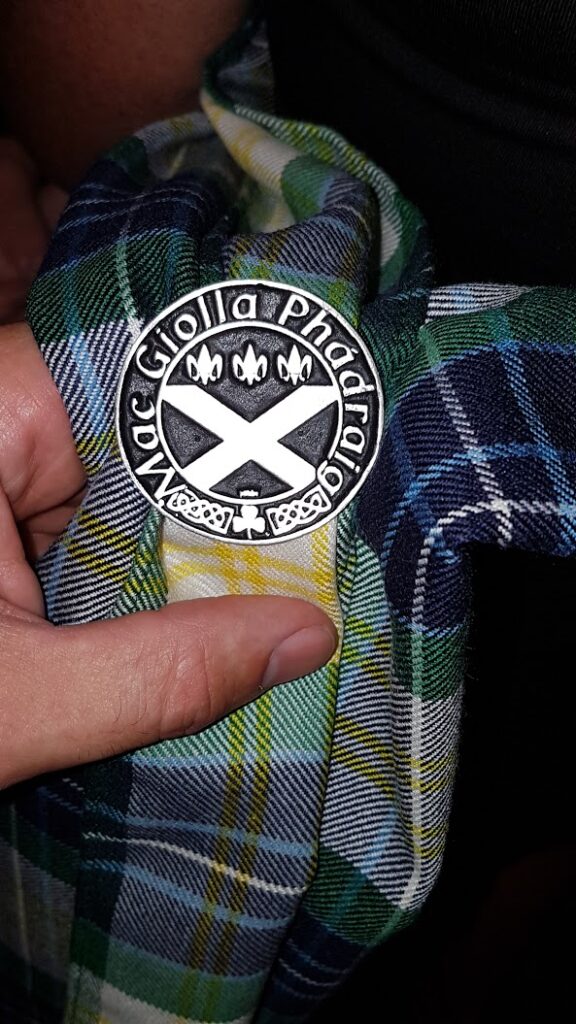 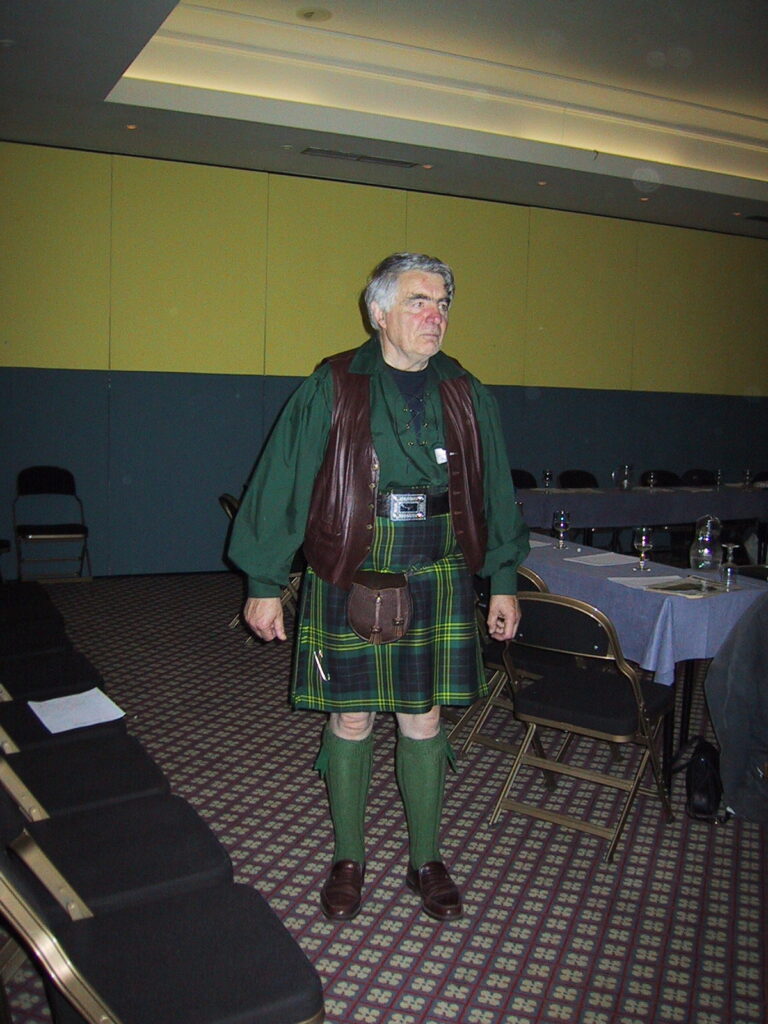 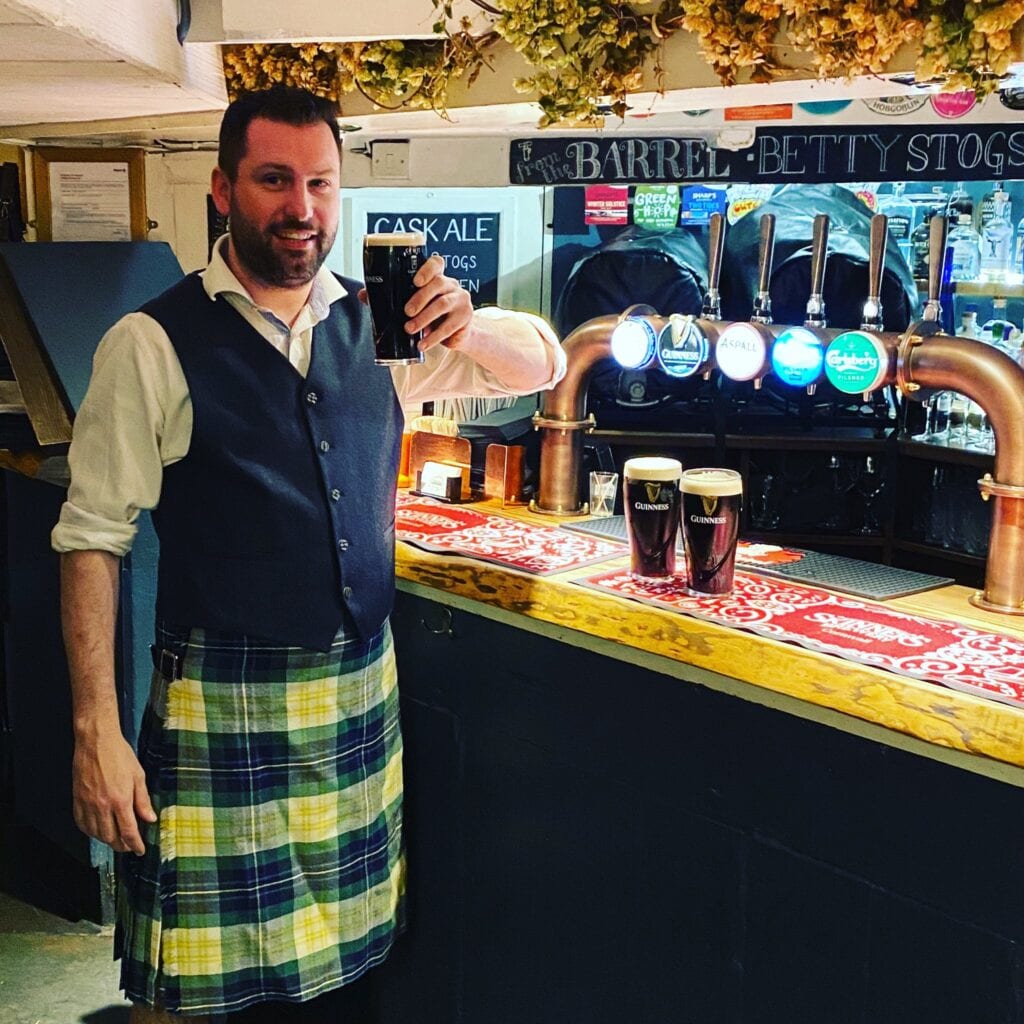